Top 10 unwritten rules of surfing every surfer should know 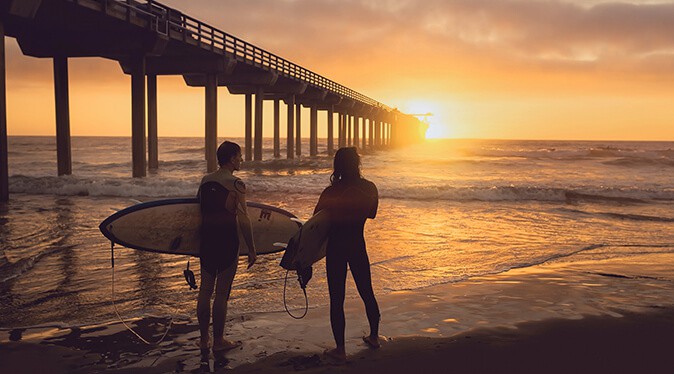 Surfing is without a doubt one of, if not the coolest sport on the planet, so it comes as no surprise to know that the worldwide surfing population is increasing more than ever. This inevitably means more people in the water trying to catch waves, surfing has long had a set of rules and etiquette to follow in the water to help reduce injury and help all water users get along. The following are 10 of the most basic rules and etiquette on how to behave in the water, if you are a beginner it’s a great idea to take note as these rules are almost universally adhered to and will help a lot in your progression in surfing.

It comes without saying but if you’re not having fun you’re not surfing, the infamous quote stating the best surfer in the water is the one having the most fun. This couldn’t be truer, as is your having fun smiling and enjoying the surf you’re going to give off great vibe in the lineup and spread the positivity.

To help stop confusion in the lineup, drop ins and nasty collision it’s important to know who has the right to the wave the basic rule is, the surfer closest to the “peak of the wave has the right of way. Basicity the person closest to the white water peak/lip as it breaks has priority. When paddling for a wave always look both ways to see if someone else is on it. The surfer on the shoulder or further down the line should always give way to a surfer already on the wave. It is possible at some beach to have a split peak where surfers take off at the same time in different directions (one surfer goes left, one surfer goes right). This requires communication to ensure clarity on the other surfer intentions

Probably one of the worst things you can do in a line up as dropping in is not only dangerous for both surfers but also creates bad vibes and tension. “Dropping in” is where the surfer closest to the peak “inside” has the right of way and another surfer further down the wave takes off in front of them dropping in on the wave. Drop ins have caused a lot of injuries in surfing and are especially dangerous, in bigger conditions. They usually increase the chance of boards hitting, leashes getting tangled and physical contact is made. Usually resulting in the wave is wasted. Stay smart and aware, that way everyone can enjoy the waves. Don’t drop in

You don’t ever want to be that surf knows for snaking waves from people “Snaking” is when a surfer in the lineup paddles around someone in order to have the right of way or be closer to the peak. Again not cool for line-up vibes this is usually seen as “stealing a wave” from under the surfer’s nose. Good thing to avoid

Depending on where you surf, may depend on the style of the paddle out point break/ reef/ beach. Don’t paddle out straight through the centre of the rideable waves as this will usually cause frustration for the surfers riding the waves as well as cause a collision. On a classic beach break or sport with multiple peaks, make sure to paddle out in the flatter sections or in between sets whilst there is a lull in the waves. To avoid being hit by another surfer paddle wide or paddle into the white water in the opposite direction the surfer is travelling this will help to keep your fingers and toes intact.

As surfer we are all trying to catch that elusive wave or get one more ride in before we go back to normality, so at some point you will accidentally drop in or you will get in someone’s way It’s going t happens we are all human so if you know you’re in the wrong apologise and say sorry respectfully and a mistake and respectfully apologize and don’t do it again.

(7) Never let go of your Board

If you’re on your own or surfing in the most crowded place it shouldn’t matter good surfing etiquette should always be used, letting you board go at any point can in danger other surfers/water users as well, as yourself. Holding on to your board is not only a respectful consideration for others but a legitimate skill for a surfer’s. It is dangerous to others, especially in a crowded lineup if you find you can’t hold on to your board then you should probably go back to smaller waves and work on the basics

when beginning your career in surfing everyone know it takes time to master the basic movements, not to mention gain knowledge about currents, rips breaks and wave knowledge, keeping this in mind chose waves and conditions right for your ability as if you a beginner heading out into a busy line up on a 6 foot perfect day probably isn’t the best idea for everyone’s safety leave that for the more experienced surfers and use the lesser quality waves (smaller/white-water|). As these will be perfect to hone your skill early on

If you have ever been out surfing and there are 1-2 guys catching all the waves, or there seems to be the same long border, SUPer, body boarder or kayaker on every wave it can be frustrating and sometimes push people to be aggressive and drop in creating hostility in the water. The best surf days are the ones where everyone takes it in turns and are friendly and respectful, chatting laughing and encouraging each other by sharing, regardless of ability or craft. Just because you have the ability to catch-all the waves, doesn’t mean you should. :

Having respect for the other surfer in the water is one thing but respect for your environment and the place your surf is more important than anything. whether it be keeping the litter off the beach or using more organic products, leaving an environment in as good or better condition to when you found it is the very soul and roots of surfing so help keep it clean respect the marine life and you have the most fun in the ocean.